“Nothing lasts forever but the certainty of change.” — Bruce Dickinson 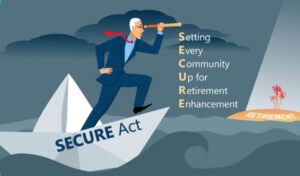 The passage of the SECURE Act has resulted in major changes to the tax rules governing contributions to, and required withdrawals from, qualified retirement plans and IRA accounts.

In many cases, the Act makes existing estate planning for retirement benefits obsolete.

While most of the changes will accelerate taxes on retirement assets, there are also some taxpayer-friendly changes as well.

Prior to January 1 of this year, IRA, 401(k), profit sharing and/or 403(b) accounts (collectively referred to here as “qualified retirement accounts” or QRA’s) allowed for account benefits to be “stretched out” over the life expectancy of an individual who was designated as the beneficiary of the QRA after the account owner died.  Furthermore, if a qualifying trust was named as the beneficiary, the distributions could be annuitized (“stretched-out”) over the life of the oldest beneficiary.

The Setting Every Community Up for Retirement Enhancement Act of 2019 (a.k.a. “The SECURE Act”) changed all that.  Subject to limited exceptions, the SECURE Act requires that “the entire interest of the employee [in a QRA] will be distributed within 10 years after the death of such employee”, unless the beneficiary is the account owner’s spouse or a disabled/chronically-ill person (either of whom may continue to stretch distributions from QRAs over their lifetimes). [1]

The SECURE Act does not change the payout rules when the owner’s estate or a non-qualified trust is named as the beneficiary.  In that case the account must be distributed within five years of death of the year that follows the date of death.

Here’s What You Can Do.

Here is a list of steps to take in response to the enactment of The SECURE Act.

1. Review Your Beneficiary Designations. There could be a critical need to make changes.  For example, now that the tax benefits of stretching out a QRA have been greatly curtailed, it may make more sense to name a charity as your beneficiary.  In that case, the money that remains in your QRA when you die will never be taxed.

Another example; if you currently name a child who is financially secure as the beneficiary of your QRA (who is unlikely to need distributions from the QRA for support), it may make more tax sense to name his or her descendants (your grandchildren) or a qualifying trust in their place.

2. Review Your Trust Agreement. Speaking of trusts, if you have named a trust as the beneficiary of your retirement account, the trust provisions dealing with retirement benefits are probably obsolete.  That’s because trusts named as QRA beneficiaries typically include provisions that require distributions from the QRA to the Trust to be immediately paid to the beneficiary.  Under the SECURE Act, this will result in the beneficiary receiving all of the QRA within 10 years of the account owner’s death.  That could cause big problems if, for example, the beneficiary is young, has special needs, is a spendthrift, or has a substance abuse problem. [2]

4. Establish a Roth QRA. A Roth is a special type of QRA that is funded with after-tax contributions.  Anyone who has earned income may establish a Roth IRA and employers may sponsor Roth 401(k)s for their employees.  While contributions to a Roth are taxable, distributions from a Roth account (whether to you or your designated beneficiary) are not.  In other words, while the tax on the earnings on a traditional QRA are deferred until those earnings are distributed, the income earned on a Roth IRA’s investments is never taxed.

5. Consider a Roth Conversion. An existing IRA can be converted into a Roth IRA.  There are at least several reasons you might want to do so. [3]

Roth IRAs can be especially beneficial when (i) you have assets outside of the money being rolled into the Roth available to pay the tax triggered by the conversion, (ii) you have a long life expectancy, and (iii) your beneficiaries are likely to keep the money in the IRA for some time after your death.

It is also important to keep in mind that partial Roth conversions are permitted.  Converting to a Roth IRA gradually can avoid being pushed into higher tax brackets. [4]

6. Reconsider How Your Investments Are Allocated. Because taxes on earnings on investments held in a qualified retirement account are either deferred (in the case of a traditional QRA) or avoided altogether (in the case of a Roth), it’s best to have those securities that would otherwise generate the most taxable income allocated to your QRA.  Further, as a general rule, because the income-tax basis of assets held outside of a QRA are adjusted to their fair market value when the owner dies, it’s best to have faster-growing assets outside the IRA.  In other words, in general terms, it’s best to hold your allocation to stocks in your taxable accounts and Treasury and corporate bonds in your QRA. [5]

Not All Bad News.

On a more positive note, not all of the changes made by the SECURE Act are negative (from a taxpayer’s point of view).  Here’s the good news:

Removal of Traditional IRA Contribution Age Limits: Previously, contributions to Traditional IRA plans were prohibited after age 70 ½.  Beginning in 2020, anyone with earned income may contribute to a Traditional IRA.  However, the age at which an individual can make a qualified charitable distribution from their IRA remains at 70 ½.

As you can see, the tax rules governing retirement account distributions are complicated and full of traps for the unwary, and thus merit a discussion with your tax advisor or estate planning lawyer to implement changes as necessary for your personal situation.

[1] Note that annual distributions are not required, meaning a lump-sum distribution in year ten is permitted.

[2] Potential solutions include amending the trust agreement to allow the trustee the authority to extend the timeframe or, if that is not possible (because the trust agreement is irrevocable), establishing a new trust with more favorable provisions and naming the new trust as the beneficiary of the QRA.

[4] In this regard, it’s important to keep in mind that the current tax brackets are set to revert to their pre-2018 levels in 2025.

[5] Because most municipal bonds are not taxed by the IRS, and may also avoid state income taxes as well, it usually does not make sense for IRAs to be owned by QRAs.